I was looking forward to new releases.  Pulling Red Sox out of Topps Series 1 was like pulling teeth.  I do not really know why.  So I got frustrated after a little while and decided to stop buying.  So when Heritage dropped, I decided to jump on it.  I was a little disappointed by the checklist.  Heritage has usually been my go-to set for good player collection.  This year it seems a little too into the stars on the team.  The only non-stars on the checklist are Mitch Moreland, Brock Holt, Christian Vazquez, Steven Wright, Eduardo Rodriguez, and Steve Pearce.  No Sandy Leon.  No Matt Barnes.  No Ryan Brasier.  No Nathan Eovaldi.  And perhaps most importantly, no Tzu-Wei Lin.

Well, this break worked out pretty well for the Red Sox.  Here is the new damage: 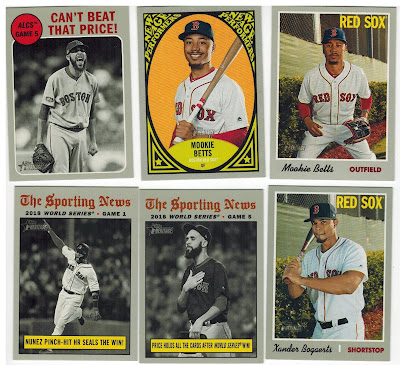 Well it certainly helps that there were a bunch of World Series and postseason highlights cards.  I pulled three Red Sox that way.  I also pulled a base Mookie, an insert Mookie, and the short-printed Xander Bogaerts.  Not too shabby.

Here is the tradebait: 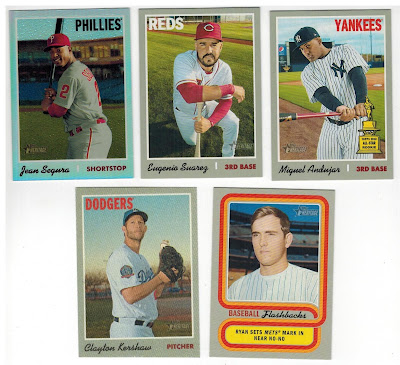 A Chrome Refractor of new Phillie Jean Segura, a couple of short-prints, a cloth Kershaw, and a Nolan Ryan insert.

Then there was this: 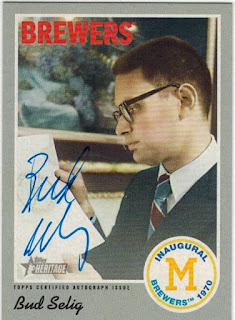 Yep, a Bud Selig autograph.  I don't know if anyone has interest in it, but I am definitely willing to move it for a Red Sox auto.  It is apparently pretty rare though, so come strong.

So, Boston wins this time.  Like I said, the postseason highlights definitely helped.  Here is the updated yearly totals:

The Red Sox move up quite a bit but are still well behind the leading team, which is oddly the Braves right now.
Posted by Metallattorney at 8:00 AM