It is time once again to check on the Tzu-Wei Lin recent additions.  Before I do though, I want to take a quick minute and look back over the season that he had.

Lin spent most of the season in Pawtucket, but had a very successful season there.  In 68 games, he hit .307/.362/.448 with five home runs and 25 RBIs.  He saw time at a number of defensive positions, including center field, improving his value.  The only real concern was the decline in his stolen base numbers.  Early on in his career, he was a good bet to steal a number of bags.  He only stole three in Pawtucket though.

He was called up to Boston a few times and ended up playing in 37 games, mostly as a pinch runner down the stretch.  He was hitting pretty well at the end of the season and got his line up to .246/.329/.415 ending up with a 100 OPS+.  He scored 15 runs, several as a pinch runner in big moments.  He also hit his first home run of his career in the ninth inning of a game against Cleveland.  His biggest strength is his defensive versatility.  Lin played shortstop, center, second, third, and DH.  If he is going to stick in the Majors, it is going to be as a utility player.  I am hoping he will take over for Eduardo Nunez next season.

Unfortunately, he was not added to the postseason roster at this time.  Lin will go down to Fort Myers to stay sharp in case he is needed.  I think this is a mistake.  Eduardo Nunez has a balky knee and Lin possesses the most speed of anyone on the team's bench.  He could be a late-inning pinch running option.

Anyway, here are the new additions: 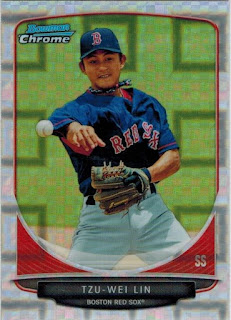 1.  2013 Bowman Chrome Xfractor.  And now officially, I have all of the relatively easy parallels from the 2013 rainbow.  The Gold is the most common card I still need and it is numbered to 50. 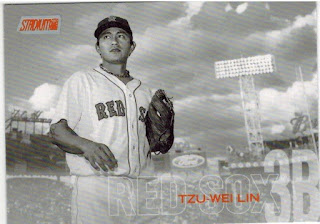 2.  2018 Stadium Club Black and White Orange Foil.  I thought I already had this one until I determined I had the Sepia version.  That could not stand. 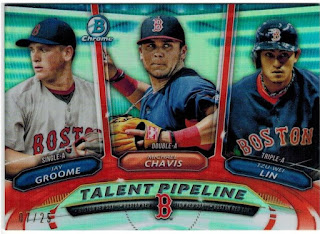 3.  2018 Bowman Talent Pipeline Orange.  This is just the second variation of this card in my collection.  I had seen the Atomic before but it disappeared off of Ebay.  Michael Chavis is still the top prospect on this card, with Groome second, but Lin has ML experience. 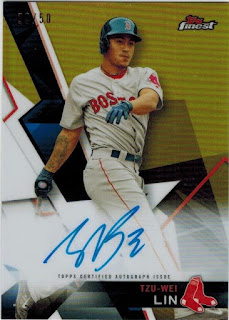 4.  2018 Finest Autographs Gold Refractor.  This is the rainbow I am primarily focused on at this time.  I need the Orange Wave, Red, Red Wave, and Super. 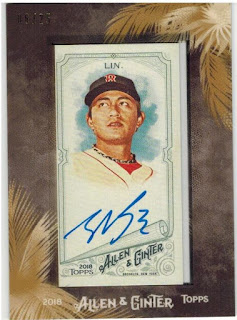 5.  2018 Topps Allen & Ginter Black Framed Mini Autograph.  This card was almost an afterthought for me.  I threw out a barely serious bid, but ended up winning it.  I intended to get it at some point, but I was not sure I wanted it right away. 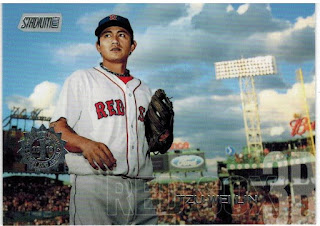 6.  2018 Stadium Club First Day Issue.  Apparently there were only ten of each of these made, despite the lack of serial number.  It is one of the rarer cards in my Lin collection so far.

That is it for now, but more are already on the way.

And now, for what I have been listening to: