It took self-restraint to not title this post Lin-is.  It would have been stupid.  And so I did not do it.  But now I am telling everyone about the stupid near-title. 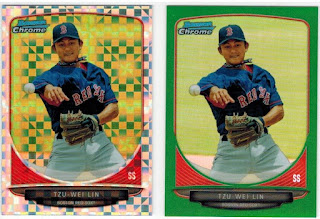 I found an Ebay seller over the weekend selling a bunch of 2013 Bowman Chrome mini colored refractors.  He had two Lin cards and I needed them both.  That was not tough since I only had the base and the regular refractor.  Well now I have the Xfractor and the Green Refractor.  I also have one other coming from another seller that popped up that same day.