A Big Wantlist Trade and Other Mail

Here are the latest roundup of packages.

Up first is a trade for a couple of Donruss Optic singles that I needed: 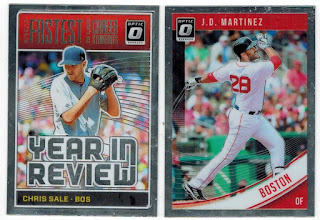 1.  Year in Review Chris Sale.  Here is a nice insert of Sale indicating that he was the fastest pitcher to 1,500 strikeouts.  That's a nice record right there.  Sale struck out 308 batters last season.

2.  J.D. Martinez.  What a great signing he has turned out to be.  Martinez has put up David Ortiz-like numbers this season.

Up next is a big trade that knocked off a lot of cards from my wantlist.  It is nice to be able to fill in some holes. 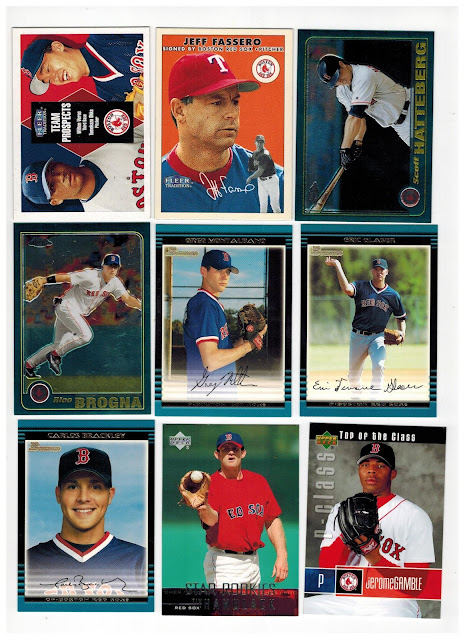 1.  2000 Fleer Tradition Wilton Veras/Tomokazu Ohka.  Here we have a couple of prospects that never quite panned out.  Ohka had some nice moments and had a reasonably long career, but Veras flamed out quickly.

2.  2000 Fleer Tradition Jeff Fassero.  Fassero had some decent seasons with the Expos and Mariners before Boston signed him to be a middle-of-the-rotation starter for 2000.  It did not work out too great as he pitched only 130 innings and was 8-8 with a 4.78 ERA.

3.  2001 Topps Chrome Scott Hatteberg.  Hatteberg was a pretty good hitter with the Red Sox and was on his way to putting up big OBP numbers before Boston traded him to Colorado for Pokey Reese.  He was miscast as a catcher though and if Boston had moved him to another position, he may have stuck.  He broke through when the A's made a first-baseman out of him.  He was portrayed by a younger Chris Pratt in the Money Ball movie.

4.  2001 Topps Chrome Rico Brogna.  He was not around long and did not do much for Boston, but he did hit a grand slam.

5.  2002 Bowman Greg Montalbano.  A local product that unfortunately never made it.

8.  2004 Upper Deck Tim Hamulack.  Hamulack never actually pitched for Boston, making this a zero-year card.  He has a lot of cards with the Red Sox.

9.  2004 Upper Deck R-Class Jerome Gamble.  I have not looked into it, but with 20 cards in my collection, Gamble has to be up there for most cards of a player that never actually played for the Red Sox. 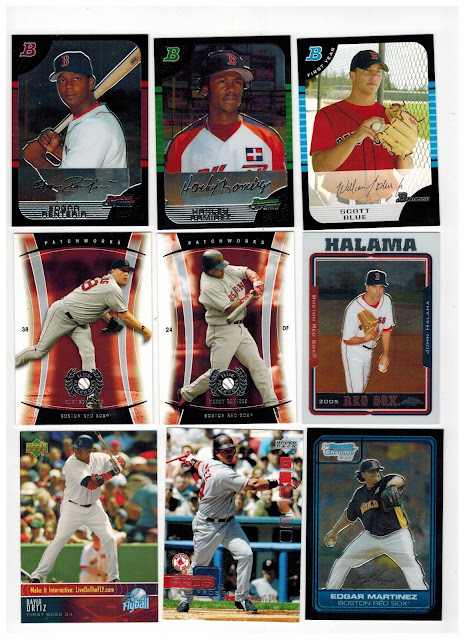 10.  2005 Bowman Chrome Edgar Renteria.  I still maintain that, other than the errors, Renteria's season in Boston was not really that bad, and it definitely was not way out of line from his career numbers.

11.  2005 Bowman Chrome Draft Hanley Ramirez.  Always interesting to add cards of Hanley from his time as Boston's top prospect.  This one features him in a Futures Game uniform.

13.  2005 Fleer Patchworks Curt Schilling.  I completely missed this set when it came out.  There were a ton of sets at this time.

15.  2005 Topps Chrome John Halama.  If I had to pick one card from this trade that was my favorite, this would be it.  He was terrible in Boston but he is one of those players that could have easily never received a card.  And yet, he does have cards.  Why is it not still like that?

16.  2005 Upper Deck Flyball.  This is another set that I missed.  I did pick up the Varitek early on (because he was my primary focus at the time), but had no idea this was a full set and not just an insert.

17.  2005 UD Pros and Prospects Manny Ramirez.  I am not sure when it happened, but at some point I stopped going out of my way to get Manny Ramirez cards.  I still loved watching him hit, and I would definitely not turn down cards, but he was very low on my priority list.  So there are a ton of Ramirez cards out there that I still need.

18.  2006 Bowman Chrome Draft Edgar Martinez.  No, not that Edgar Martinez.  This one used to be a position player who converted to pitcher and briefly looked like a decent relief prospect.  He never made it though. 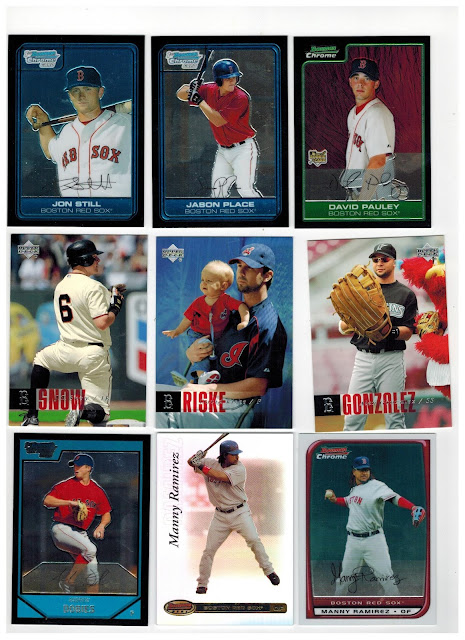 20.  2016 Bowman Chrome Draft Jason Place.  Place was a first-round pick who never made it close to the Majors.  Boston did not have the best of luck with prospects for awhile.

21.  2016 Bowman Chrome Draft David Pauley.  Pauley is mostly known for being one of the pieces the Red Sox received from the Padres in exchange for Dave Roberts after the 2004 season.  None of those pieces (Jay Payton and Ramon Vazquez were the others) did much for the Red Sox.  It looked like an interesting trade at the time.

23.  2006 Upper Deck David Riske.  Sure, it features him in an Indians uniform, but there are not many Riske cards with the Red Sox, so I needed to get this.

24.  2006 Upper Deck Alex Gonalez.  Sure, it features him in a Marlins uniform, but there are not many Gonzalez cards with the Red Sox, so I needed to get this.

25.  2007 Bowman Chrome Prospects Andrew Dobies.  Yet another prospect who crashed. 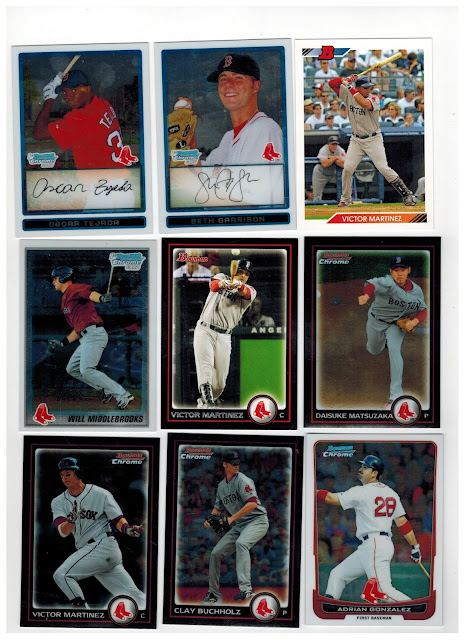 28.  2009 Bowman Chrome Prospects Oscar Tejeda.  And another failed prospect.  He was a big deal when he was signed as an international free agent, along with Engel Beltre, who almost made it.

30.  2010 Bowman 1992 Throwback Victor Martinez.  I think I was resentful of Martinez taking Varitek's starting catcher position, so I was not big on adding his cards.  I have been working on that though and he had a terrific run with the Red Sox.

31.  2010 Bowman Chrome Prospects Will Middlebrooks.  He had some flashes of stardom, including a very good rookie season, but he ultimately failed too.  At least he had some success in the Majors.

33.  2010 Bowman Chrome Daisuke Matsuzaka.  Like Manny, I got a little tired of the tons of Dice-K cards flooding the market, so I stopped focusing on his cards after 2008.

34.  2010 Bowman Chrome Victor Martinez.  And another V-Mart.  I am not sure why the pictures on the Bowman and Chrome cards are different.

35.  2010 Bowman Chrome Clay Buchholz.  I always liked Buchholz and I think his injuries prevented him from becoming a really good pitcher.

36.  2012 Bowman Chrome Adrian Gonzalez.  I thought I had this one, but apparently not. 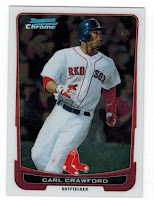 37.  2012 Bowman Chrome Carl Crawford.  What a bust Crawford was in Boston, which sucks because I was so excited when Boston signed him.

The next scan includes two trade packages.  The first row was one trade and the second and third rows were another trade. 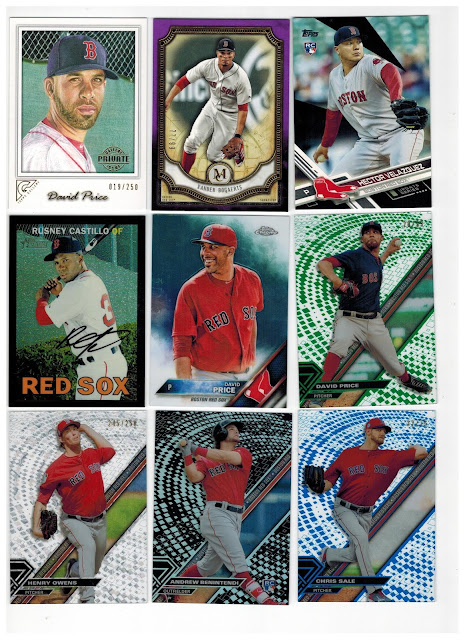 1.  2017 Topps Gallery Private Issue David Price.  I have a suspicion that Price is not long for Boston.  He says he will not opt out and I think his contract if he does will actually be less than if he stayed in Boston, but I get the impression he is not happy with the Red Sox.  I like the guy and was excited when he signed, but he has been mildly disappointing.

2.  2018 Topps Museum Collection Amethyst Xander Bogaerts.  Xander is one of my favorite players and I like him more and more every year.  He is probably second only to Mookie on the current team.

3.  2017 Topps Update Black Hector Velazquez.  Velazquez is an underrated performer on the team.  He was signed from the Mexican League prior to last season and has pitched some quality innings for the team this year in particular.  This card was the impetus for this trade.

The next trade was focused on adding some 2017 High Tek patterns.
4.  2016 Topps Heritage Chrome Black Refractor Rusney Castillo.  I suspect he will never play in Boston again, but if it weren't for his contract, he would be worth another shot.  It is kind of a shame how this worked out.

5.  2017 Topps Chrome David Price.  I had no idea I did not have any base Chrome cards from last season.  I have some catching up to do apparently.

6.  2017 Topps High Tek Green Rainbow David Price.  This is the card that started this trade, but it is not the best card from the trade.

7.  2017 Topps High Tek Tidal Diffractor Henry Owens.   Topps went crazy with Henry Owens cards, even in 2017 after he had a horrible season.  Owens was once Boston's top pitching prospect but he was way too wild.

8.  2017 Topps High Tek Blackout Andrew Benintendi.  It is possible that Benintendi will go down as the greatest Top 10 draft pick the Red Sox will ever make.  His biggest competition is Trot Nixon.

9.  2017 Topps High Tek Blue Rainbow Chris Sale.  This is the best card from the trade.
Posted by Metallattorney at 8:00 AM