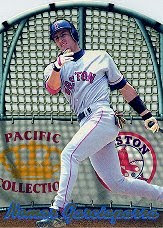 NOMAR GARCIAPARRA
Is Nomar Garciaparra a future Hall of Famer? I personally believe that he should merit induction, and it's not just because he was one of my favorite players when I was growing up. Garciaparra was easily one of the best hitting shortstops ever at his peak. He was also one of the best players in the game from 1997 through 2003. The downside is obvious, he really did not play particularly well from 2004 on to the end of his career, and he did not stick at shortstop.

Garciaparra came up at a time when the American League had three great young shortstops. Garciaparra was a great hitter at his peak and put out one of the all-time greatest rookie seasons. He won two batting titles in 1999 and 2000 and was a good bet to hit 25 home runs and drive in 100 runs every year. Pretty lofty numbers for a middle infielder.

Garciaparra did falter after being traded to the Cubs in 2004 and was never again the same hitter. He did hit 20 home runs for the Dodgers in 2006, but that was the only time after leaving Boston that he hit more than nine. It is this steep decline that makes his Hall of Fame candidacy questionable.

For his career, Garciaparra hit .313/.361/.521/.882, numbers that are better than his contemporary, Derek Jeter. However, Garciaparra had a shorter career and only spent the first nine seasons at shortstop. Will his status as one of the best shortstops in the game for those nine seasons be enough to put him in the Hall? It should, but looking at the voting record for players like Alan Trammell and Lou Whitaker does not fill me with confidence.

THE VERDICT
I do think Nomar belongs in the Hall, but there are some serious issues with his candidacy.
Posted by Metallattorney at 4:20 AM

Email ThisBlogThis!Share to TwitterShare to FacebookShare to Pinterest
Labels: garciaparra, hall of fame