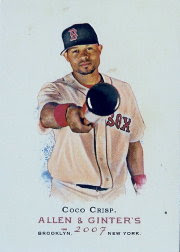 COCO CRISP
Okay, we can talk about this now. Coco Crisp was a bust in Boston. A year after hitting .300/.345/.465/.810 with 16 home runs and 15 stolen bases, Crisp was acquired to take over in center field for the departed Johnny Damon. Basically, he was considered to be a younger version of Damon. It was a pretty big trade and Boston was credited for their ability to trade for him.

Only problem was Crisp never developed into a Damon-type player. He had a great Spring Training with Boston and looked ready to play well in 2006, until he broke a finger early in the season. In 105 games with Boston that first year, he only hit .264/.317/.385/.702 with eight home runs. He did steal a career high 22 bases and was the team's only credible base-stealing threat.

In 2007, Crisp improved slightly, but still did not come close to matching his 2005 season. He once again set a career high for stolen bases with 28, but basically lost his job late in the season to Jacoby Ellsbury.

In 2008, Crisp split time with Ellsbury and played other positions in the outfield. His overall numbers were better once again as he hit .283/.344/.407/.751 but he only hit seven home runs and stole 20 bases. Crisp was traded after the season to Kansas City for Ramon Ramirez.

In his time with Boston, Crisp made several highlight reel catches in center field. His defense, particularly in 2007 was his strength. That year, he put up a dWAR of 2.6. He was a threat on the basepaths, and he could fight as James Shields could attest. However, Crisp was not the player Boston expected when they traded Kelly Shoppach, Andy Marte, and Guillermo Mota. That player never emerged. Crisp was serviceable and fun to watch, but nowhere near a star.
Posted by Metallattorney at 4:38 PM