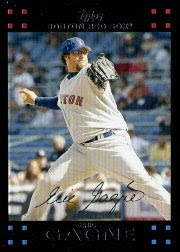 ERIC GAGNE
Wow, this one is a massive bust. Eric Gagne was supposed to come in and solidify the bullpen in 2007. He was acquired at the trading deadline in a large trade in which the Red Sox gave up former first round draft pick David Murphy, Kason Gabbard, and minor league slugger Engel Beltre. Boy, does this trade look awful now, with Murphy being a solid regular in the outfield and Beltre being one of Texas's top prospects.

Gagne was having a pretty good year in Texas in 2007, his first year away from Los Angeles, for whom he won the 2003 Cy Young Award. At the time of the trade, he had pitched in 34 games, saving 16, with a 2.16 ERA and 29 strikeouts and 12 walks in 33.1 innings. He went to Boston and was only supposed to be a setup man to young closer Jonathan Papelbon. He pitched in 20 games for Boston, but his ERA was 5.75 and he was 2-2 with three blown saves.

He also pitched badly in four games in the playoffs against American League teams, giving up three earned runs and two walks in 3.1 innings. He did pitch a perfect inning against Colorado in the World Series, but that was his only playoff success that year.

For costing the Red Sox two good young players and pitching horribly for two months, Gagne is one of the biggest trade deadline busts in recent memory.
Posted by Metallattorney at 5:44 PM