I finally made some more progress toward my Tzu-Wei Lin collection.  This is card #100, and it is a pretty exciting one for the milestone: 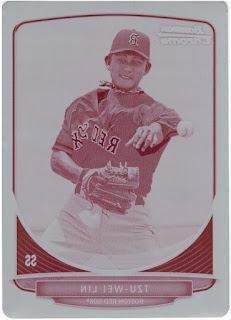 Nice 1/1 and my first Lin printing plate.  I was thrilled to add this card, particularly as it was a bit of a bidding war. 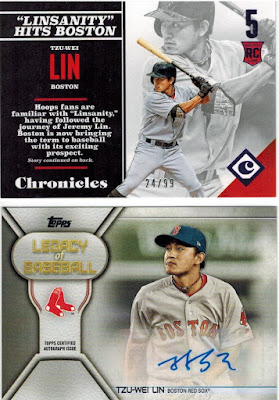 Here we have the Panini Chronicles Purple parallel, which is numbered out of 99.  This was one of the last parallels I needed from that set.  And then this is the base version of the Legacy of Baseball autograph.  Cards are getting hard to find, unless I want to add a bunch of the Rize cards.  These may be the last Lin cards for awhile. 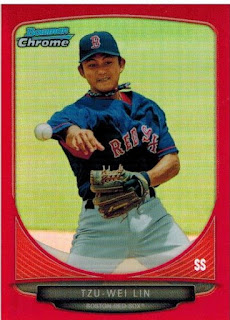 This is actually the mini Red Refractor, serial-numbered to 10.  So, this has been some legitimate progress toward the Bowman Chrome rainbow.

I am concerned about Lin's future with Boston, particularly in light of Michael Chavis's emergence as a potential star.  Chavis will likely take the bulk of the at-bats at second going forward, with Dustin Pedroia attempting to come back.  Lin suffered a rather poorly-timed injury.  I doubt he will be back in the Majors right away when he comes back.  Hopefully he will find some roster space later this season and stick around for awhile.
Posted by Metallattorney at 8:00 AM

Email ThisBlogThis!Share to TwitterShare to FacebookShare to Pinterest
Labels: lin