This is the last catch-up post for now.  I bought two jumbo packs of Bowman and a blaster of Big League.  Here are the Red Sox: 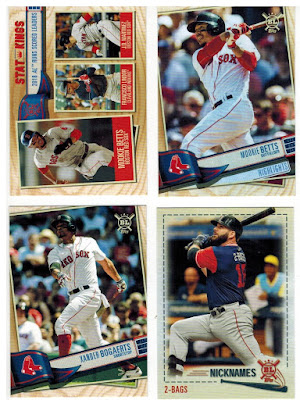 As you can obviously tell, there are no Bowman cards.  I did not pull a single Red Sox card from the Bowman packs.  It is made-up for somewhat in the Big League pulls with four Red Sox, though three of those all came in one pack.  So, it was a little frustrating.  That being said, I absolutely love the Mitch Moreland Nicknames card here.  Exactly the kind of card I love pulling.  An insert of a player without a lot of cards.  With the two Mookie cards, he is now at 200 cards in my collection.  An impressive feat.

The Padres had a huge breakthrough, mostly on the strength of a very strong Bowman showing.  They do have a ton of prospects, so that was not terribly shocking.  Boston finished in the middle of the pack.  Not a great showing, but much better than I thought after the awful Bowman break.

I don't understand this Braves thing.  What the hell is going on?  Boston stays in third, but loses ground to the Angels.  The Padres made a huge leap out of the cellar, leaving the poor Giants in the dust.
Posted by Metallattorney at 8:00 AM