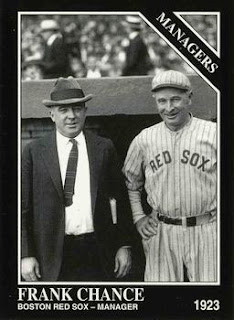 Somehow, I do not own that card.  Frank Chance was part of the legendary Cubs Hall of Fame double play combo immortalized in "Baseball's Sad Lexicon" of Tinker to Evers to Chance.  Chance became the Cubs' player-manager in 1905 and continued in that role through the 1912 season.  He then continued this role with the Yankees for the next two seasons, though his playing time was greatly diminished.  In 17 seasons in the Majors, Chance hit .296/.394/.394 and stole 403 bases.

After the 1914 season, Chance stayed in baseball, but managed and was an executive for Pacific Coast League teams.  Somehow, he returned to the Majors to manage the Red Sox in 1923.  This was not a good Red Sox team.  The team finished 61-91 and had very few decent players.  Almost all of the good Red Sox players had already been sold or traded, most of them to the Yankees.  Joe Harris was the team's leading hitter, and Ira Flagstead and George Burns were also good players.  Howard Ehmke won 20 games and Jack Quinn was a decent number two starter.  Things were not as bleak as they would be later in the decade.

Chance only signed a one-year deal to manage the Red Sox.  He returned to Chicago to manage the White Sox in 1924, but came down with influenza before the season began.  He died later in the year.

Frank Chance only spent one season in Boston as a manager.  He is in the Majors almost entirely due to his time with the Cubs as player and manager.  All three of the double play trio were eventually enshrined in Cooperstown in 1946.  It is fair to say that Chance's time with the Red Sox was an afterthought in his career.
Posted by Metallattorney at 9:00 AM