Bo Rosny of the amazing blog Baseball Cards Come to Life, contacted me recently with a message that he could help me out with some of my vintage needs.  After a couple of weeks in which I accidentally forgot about things (damn Supreme Court brief).  But anyway, it did eventually work out and he covered quite a few of my vintage needs.  And to say that some of these cards were well-loved is an understatement.  I don't know if it was Bo, or someone else that owned these cards, but someone made efforts to update the teams on some of these guys. 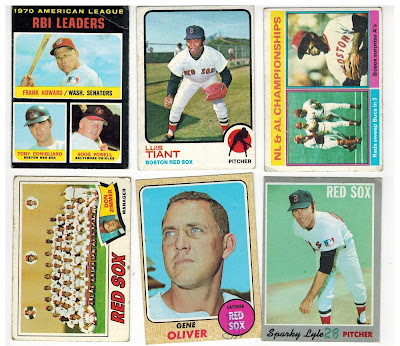 1.  1971 Topps Frank Howard/Tony Conigliaro/Boog Powell.  1970 was Conig's comeback season and he hit career highs in home runs (36) and RBIs (116).  Unfortunately, it went straight downhill from there.  His eye problems that began when he was hit with a pitch came back and he hit just six more home runs in his career.

3.  1976 Topps Luis Tiant.  Nice LCS highlight card here.  Tiant was a revelation in the 1975 postseason.  I would still love to see him in the Hall of Fame.  Hopefully next year.

4.  1977 Topps Don Zimmer/Team Card.  Zimmer was a decent strategist, but had a hard time relating to players of the 1970's, in particular Bill Lee, Ferguson Jenkins, Reggie Cleveland, Bernie Carbo, and a few others.

5.  1968 Topps Gene Oliver.  Oliver had some decent years with the Braves and joined the Red Sox for the 1968 season.  He did not play much for Boston before being sold to the Cubs the same year.

6.  1970 Topps Sparky Lyle.  Next to the Tiant cards, this is probably my favorite card I received.  Lyle was turning into a pretty decent reliever with the Red Sox before being foolishly traded to the Yankees for Danny Cater and Mario Guerrero. 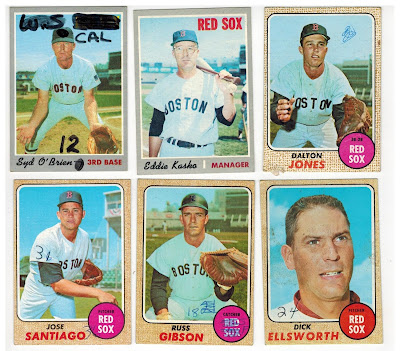 7.  1970 Topps Syd O'Brien.  See what I mean about well-loved?  Someone was updating this card to show that O'Brien moved on to the White Sox and then Angels.

9.  1968 Topps Dalton Jones.  Not much to say about Jones.  He was a pretty non-descript ballplayer, though he had some nice moments in the 1967 season.

That's it for the cards from Bo.  Thanks Bo!
Posted by Metallattorney at 8:00 AM