It is time for a Tzu-Wei Lin addition post.  Lin popped up in 2019 Topps Series 1 with yet another autograph.  And several parallels to that autograph.  I have yet to pick up the base series auto, but I did knock off a couple of the parallels in one shot.  Here they are: 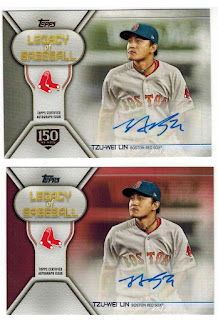 Lin is already reportedly present at the Red Sox Spring Training site, even though it is not even the official time for all pitchers and catchers to report.  This shows an impressive commitment on the part of Lin.  It would be great if he could follow up with a big Spring and make the team right away.
Posted by Metallattorney at 8:00 AM