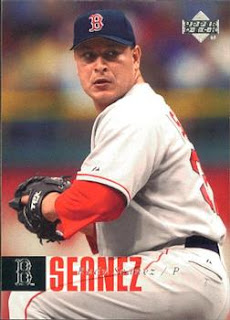 Middle relievers just do not get enough cards these days.  Seanez had a long 17-year career and he has fewer than 80 cards, and yes, that includes all of the parallels of him.  He spent parts of two seasons with the Red Sox and only appears on this card (and all of the parallels).

Seanez made his Major League debut with the Indians in 1989 at just 20 years old.  He would eventually pitch for nine Major League teams and had his best seasons with the Braves in the late 1990's.  He was primarily a setup man.  He never started a game in the Majors and never saved more than three games in any season in his career.

The Red Sox signed Seanez as a free agent in May of 2003, but spent most of the season in the minors.  He appeared in just nine games with Boston, but was 0-1 with a 6.23 ERA.  He struck out nine, but walked six in 8.2 innings.  After the season, he bounced around a bit more, but returned to the Red Sox in 2006.

Seanez was a big part of the Red Sox bullpen in 2006, appearing in 41 games until he was released in August.  He was 2-1 with a 4.82 ERA and finished 16 games, though he did not pick up any saves.  His strikeout rate was still impressive, striking out 48 in 46.2 innings, but he walked 26.  He was released and ended up in San Diego.

I remember Seanez pretty well because he pitched in both games I saw in 2006, including the only game I have seen at Fenway so far.  He picked up a hold in that game, pitching 1.2 innings with a strikeout, though he gave up three hits.  The second game was not as impressive, he gave up a home run in a loss to the Royals in 1.2 innings.  He gave up two hits and a walk.
Posted by Metallattorney at 8:00 AM

Email ThisBlogThis!Share to TwitterShare to FacebookShare to Pinterest
Labels: one card wonder, seanez