I have been watching baseball for 26 years now. In that time, I have been obsessed with under-the-radar players. These are my picks for an All-Underrated Team. I have picked one player for each position and their best season. 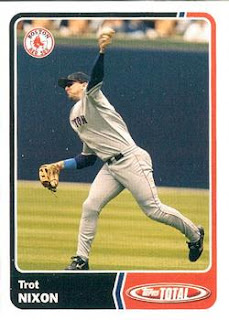 I still do not understand how Trot Nixon was never an All Star.  For a three-year period from 2001 through 2003, Nixon was a terrific player with a 128 OPS+ and hit 79 home runs.  His best season though was undoubtedly 2003.  He was not an All Star and did not even receive any MVP votes despite a fantastic season.

What worked against Nixon was his inability to hit against left-handers and the fact that he played for a team that was so loaded with powerful hitters that Nixon was almost an afterthought.  Nixon's slash line was just .219/.296/.375 against lefties.  Nixon also was on the same team as Nomar Garciaparra, Manny Ramirez, David Ortiz, Kevin Millar, Jason Varitek, Bill Mueller, and Johnny Damon.  Despite all of that thunder, Nixon was tied for third in home runs, fifth in RBIs, and third in average, OBP, and slugging.

In the postseason, Nixon was a difference maker.  He hit a walk-off home run to win Game 3 of the ALDS against the Athletics which shifted momentum to the Red Sox after the team was down two games to none.  Boston went on to win the ALDS series and play the Yankees in the ALCS.  Nixon hit .333 with three home runs and five RBIs in the ALCS loss to the Yankees.

Unfortunately, 2003 was Nixon's last great season.  Injuries took their toll on his career from then on, but he still had some good moments.  He played with Boston through 2006 before bouncing around a little after that.
Posted by Metallattorney at 8:00 AM