I know, eventually I will get back to posting regularly.  I have just been very busy of late.

Before the season started, Topps Now was offering special Road to Opening Day team sets.  Naturally, I had to pick up the Red Sox set.  It took a little longer than I expected to receive, but I did finally get it last week some time.  So, let's look at the cards and see if they missed on somebody: 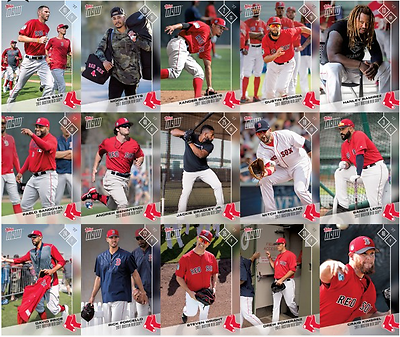 2.  Mookie Betts.  His batting average is down, but his other numbers are just as impressive as last year.

3.  Xander Bogaerts.  His power is starting to come around, and his batting average has always been high.  Bogaerts is actually looking underrated these days what with the influx of star shortstops.

4.  Dustin Pedroia.  When he has been on the field, he has been decent.  He has been out with a number of minor injuries, and his power is down as well.  He is still a great defensive player though.

5.  Hanley Ramirez.  Ramirez is suffering from some nagging injuries that have impacted his hitting.  He is having a rough season.

6.  Pablo Sandoval.  Despite showing up in Spring Training in the best shape of his career, that promise has not carried forward into the season.  He has been brutal.  He has also been hurt a lot.  At this point, I am hoping for Deven Marrero to be the stopgap third-baseman until Rafael Devers is ready.

7.  Andrew Benintendi.  His slump in May hurt his numbers, but he is coming around and is having a good rookie season.

8.  Jackie Bradley Jr.  He is also coming around lately after a brutal start to the season.  His defense has been terrific and his numbers are looking pretty good.  Not where he was last season at this time, but very reasonable for a center fielder.

9.  Mitch Moreland.  It was something of a maligned signing at the time, but he is turning into one of the best bargains of the offseason.

10.  Sandy Leon.  Predictably, Leon has not been nearly as good as he was last season.  At least offensively.  He has been pretty good defensively though.  Leon has played in slightly more games than backup Christian Vazquez, who has a decent average, but no power.

11.  David Price.  Price spent most of the season on the DL.  He has only pitched a few games so far and they have been pretty inconsistent.

12.  Rick Porcello.  After winning the Cy Young Award last season, Porcello has had a rough season.

13.  Steven Wright.  He made the All Star team last year, but has been pretty bad in 2017.  He also went down with a season-ending injury.  He maybe should have been replaced in this set by Eduardo Rodriguez.

14.  Drew Pomeranz.  Other than the occasional bad game, Pomeranz has been a decent back-of-the-rotation starter.

Tomorrow, I will show off the other part of this package.  It was definitely worth it.
Posted by Metallattorney at 11:04 PM