Over the next few days, I am going to catch up on my new cards.  It will not take too terribly long, but I am behind.

Here is the first batch, from a 2017 Bowman blaster: 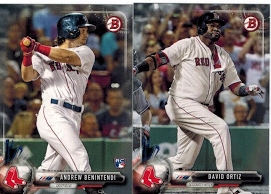 Yeah, not much to show for that.  Just two base cards, one of a hitter just starting his career, and the other of a player ending his.  Andrew Benintendi is the latest homegrown outfielder from the Red Sox system, joining Mookie Betts and Jackie Bradley Jr. to give the Red Sox a terrific young core in the outfield.  Each one of those players could easily play center field as well, giving the team some great defense.  David Ortiz obviously retired last season and just recently had his number retired by the team.  I am surprised to keep seeing Ortiz cards this late into the season, not that I have a problem with it.
Posted by Metallattorney at 8:14 PM