A Couple of Lowell Jerseys

I have not been as enthusiastic about relics in recent years, but I still like to add them when I can.  Yesterday I received two cards in two packages, and they were both jersey cards of former third-baseman and 2007 World Series MVP Mike Lowell. 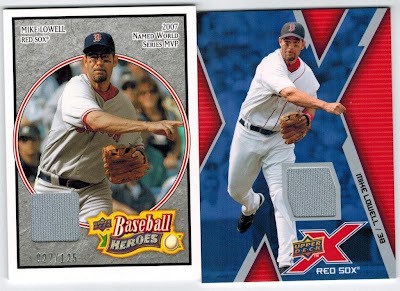 1.  2008 Upper Deck Baseball Heroes Jersey Gray Mike Lowell.  I was supposed to get this card in a trade but after a month and a half it looks like I will never get it.  I found it for sale somewhere else and bought it.