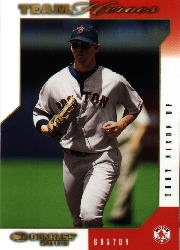 Trot Nixon was not a completely unknown player. He was the seventh overall pick in the 1993 draft and of course he was a big player on the 2004 World Champion Red Sox. But Nixon did not develop into the player he was expected to be when he was drafted and he was never an All Star. Nixon never received a single MVP vote. He played well, but he mostly played under the radar.

Nixon had a couple of brief stints with the Red Sox in 1996 and 1998 before making the big leagues for good in 1999. He immediately showed the kind of player he would become with a high on-base percentage, some power, and strong defense. Nixon emerged as a very good player in 2001 when he hit .280/.376/.505 with 27 home runs and 88 RBIs. He was one of the most consistent offensive players on the team that year.

He had a similar power year in 2002, but his batting average and on-base percentage dropped. Then in 2003, he had his best season, hitting .306/.396/.578 with 28 home runs and 87 RBIs. He finished in the top ten that year in on-base percentage and slugging percentage. Yet he was not an All Star or received an MVP vote, even though the Red Sox were in contention that year.

Injuries started to take their toll in 2004, though he was healthy by the time the World Series came around and he hit .357/.400/.507 in the Series. He was back to being a regular in 2005, but his numbers were not as impressive and they declined even more in 2006. The Red Sox let him go to Cleveland after the season signing the similar J.D. Drew instead. Nixon was done as a regular though and did not play much with the Indians. He ended his career with 11 games with the Mets in 2008.

Nixon is the original Boston Dirt Dog and he will always be remembered fondly.
Posted by Metallattorney at 12:15 PM