Sorry I have not been posting much lately.  I have had a lot of other things going on these days.

Anyway, here is a pretty big trade I worked out recently: 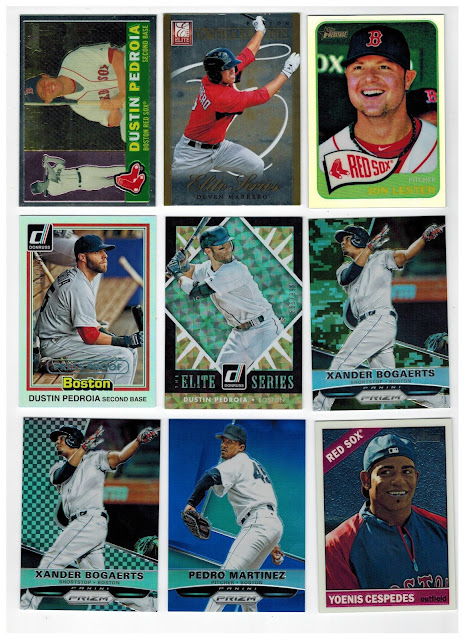 1.  2009 Topps Heritage Chrome Dustin Pedroia.  Good to have Pedroia back in the lineup.  Eduardo Nunez has been good, but Pedroia's defense is terrific.

2.  2012 Donruss Elite Extra Edition Elite Series Deven Marrero.  Marrero does not hit much, but his defense makes him a decent backup infielder.

5.  2015 Donruss Elite Series Dustin Pedroia.  As you can see, I added some nice Pedroia cards in this deal.

6.  2015 Panini Prizm Camo Xander Bogaerts.  Bogaerts needs to be more consistent.  He goes through extremes and it gets frustrating.

8.  2015 Panini Prizm Blue Pedro Martinez.  Pedro is still the most recent Red Sox Hall of Famer.  Hopefully someone will join him next year.

9.  2015 Topps Heritage Chrome Yoenis Cespedes.  Cespedes just did not work out well for the Red Sox.  But he was traded for Rick Porcello who had a Cy Young season last year, so there is that. 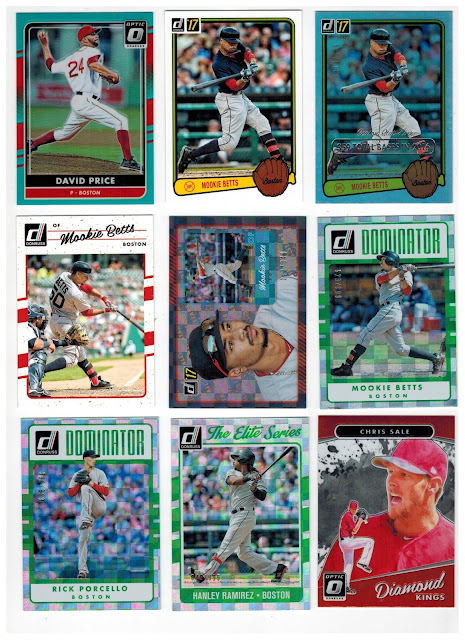 10.  2016 Donruss Optic Cyan David Price.  Price has not been as advertised for much of his stint in Boston either yet.

13.  2017 Donruss Variation Mookie Betts.  This one is a photo variation of Mookie.

16.  2017 Donruss Elite Dominator Rick Porcello.  Here is last year's Cy Young winner, who has struggled quite a bit this season.

17.  2017 Donruss Elite The Elite Series Hanley Ramirez.  Another player who has struggled quite a bit this season, but the power is still there.

18.  2017 Donruss Optic Chris Sale DK.  For awhile, Sale looked like the runaway Cy Young winner this year.  I think Kluber for the Indians will probably come away with it. 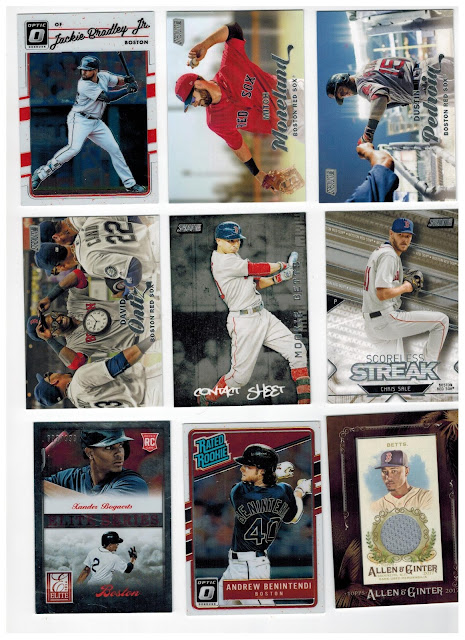 20.  2017 Stadium Club Mitch Moreland.  Moreland has been a great defensive first-baseman with some decent pop.  He is not likely to be back in Boston next season though.

27.  2017 Topps Allen & Ginter Mini Relics Mookie Betts.  I was not originally supposed to get this card, but the other trader was very late in sending the cards and gave me a couple of extras for my patience.  Patience is a virtue.  He did not have to do that and I had no idea he was doing it, but I am very grateful. 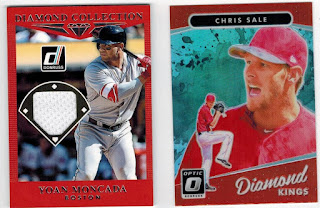 28.  2017 Donruss Diamond Collection Yoan Moncada.  This was another throw-in.  I am even happier about this one.