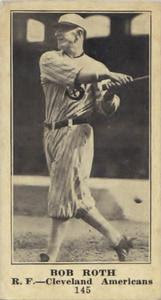 BRAGGO ROTH - 1919
Braggo Roth is one hell of a baseball name.  Roth did not have a long career, just eight years, but he played for six different teams and has some success from time to time.  He split the 1915 season between the White Sox and Indians and ended up leading the league in home runs (7).  He had a decent run with the Indians in the late 1910's, hitting .286/.366/408 with Cleveland over parts of four seasons.  He started the 1919 season with the Athletics before being traded to Boston with Red Shannon for Amos Strunk and Jack Barry.  Roth played in 63 games the rest of the season, his only one with Boston, and hit .256/.337/.330 while stealing nine bases.  After the season, he and Shannon were again on the move, this time to Washington, for a package led by Mike Menosky.  Roth had one more decent season with Washington, then played for the Yankees before hanging it up. 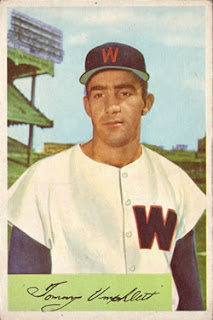 TOM UMPHLETT - 1953
There is not much to say about Tom Umphlett really.  He played just three seasons in the Majors, one with Boston and two with Washington.  So, why is he here?  Well, because his one season in Boston saw him finish second in the Rookie of the Year vote, and I have a hard time ignoring that, even for a player who had a very limited career.  Umphlett hit .283/.331/.376 with three home runs and 59 RBIs as the Red Sox center fielder in 1953.  Not great numbers, but for a rookie, they were pretty solid.  Boston then packaged him along with Mickey McDermott to go to Washington in exchange for Jackie Jensen, which was a great deal for Boston.  Umphlett's numbers tanked and he was out of baseball after two dismal season.  Meanwhile, Jensen was a huge star in Boston.  Umphlett does have the distinction of being the all-time Red Sox leader in home runs for a player whose last name starts with "U" though.  So, there is that. 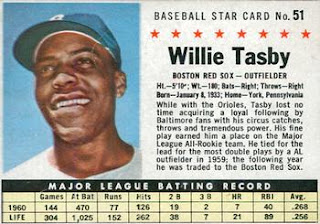 WILLIE TASBY - 1960
At the very least, Willie Tasby is the answer to an interesting piece of trivia.  He was the first black player the Red Sox acquired in a trade, and the third black player overall to play for the Red Sox.  Tasby came up with the Orioles and was a decent player for a few years, mostly due to his athleticism in center field.  The Red Sox shipped Gene Stephens to the Orioles in June of 1960 to acquire Tasby to shore up their outfield.  He turned in a decent season the rest of the way with the Red Sox, hitting .281/.371/.384 with seven home runs and 37 RBIs.  After the season though, he was selected by the new Washington Senators in the expansion draft in December.  He was decent in 1961, but struggled for a couple of seasons afterwards. 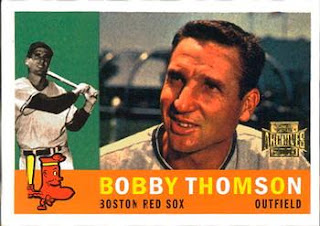 BOBBY THOMSON - 1960
Thomson is mostly known for the "Shot Heard 'Round the World", the home run he hit off of Ralph Branca to propel the New York Giants to the NL Pennant over the Brooklyn Dodgers in 1951.  He played for the Giants for several years and had a lot of success, named to three All Star teams and receiving MVP votes in three seasons.  He drove in over 100 runs four times and typically hit 25-30 home runs for the Giants.  He later played a few seasons for the Braves and Cubs.  Thomson was traded to the Red Sox for Al Schroll prior to his final Major League season and played in 40 games, hitting .263/.323/.439 and hit the final five home runs of his career.  He was released by Boston early in July and caught on with the Orioles, for whom he finished his career.  Thomson barely qualifies at center field, he played 13 games in center and 12 in left for Boston. 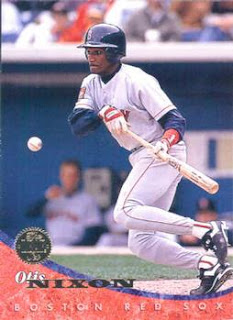 OTIS NIXON - 1994
The Red Sox throughout the years have typically been a team bereft of speed.  That was certainly true throughout the 1980's and 1990's.  For one season, in 1994, the team made a conscious effort to change all of that, bringing in speedster Otis Nixon on a free agent contract from the Braves.  Nixon was just three years removed from a season in which he stole 72 bases and he had not stolen fewer than 35 since 1987.  He was definitely as advertized, stealing 42 bases, and likely would have stolen more had the season not been shortened due to the players' strike.  He could have broken the team record of 54 stolen bases.  Nixon was never much of a hitter and had very little power, relying on his speed to get on base.  He hit .274/.360/.317 with Boston with no home runs, 15 doubles, and one triple.  He drove in 25 and scored 60 runs.  Despite his reasonable success, Nixon was traded to Texas after the season in exchange for Jose Canseco. 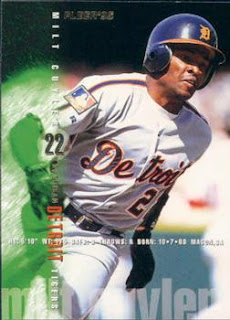 MILT CUYLER - 1996
The mid 1990's saw the Red Sox experiment with a lot of low-risk acquisitions.  Some worked out, others definitely did not.  Milt Cuyler was one of a number of such players to be brought to the Red Sox for the 1996 season.  Cuyler had once been a bright prospect in the Detroit Tigers system and arrived in the Majors with much fanfare, finishing third in the Rookie of the Year vote in 1991 when he stole 41 bases.  Unfortunately, he was never again able to replicate that success.  He stayed with Detroit through the 1995 season, then Boston took a flyer on him.  He played in only 50 games with Boston and hit just .200/.299/.300 with two home runs, 12 RBIs, and seven stolen bases.  He was sent back to the minors and did not appear again the Majors until seven games with Texas in 1998. 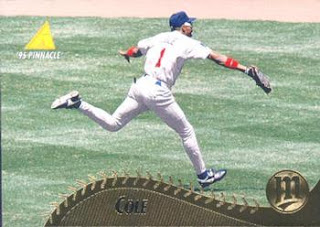 ALEX COLE - 1996
Another speedster from the early 1990's that had fallen on hard times, Alex Cole finished ninth in the Rookie of the Year vote in 1990 when he was with the Indians.  That year, despite playing in just 63 games, Cole stole 40 bases.  He had a pretty good sophomore season, though his stolen base total dropped to 27.  After a rough start to the 1992 season, he was traded to the Pirates in July and also played for the Rockies and Twins, with varying amounts of success, and quite a few stolen bases.  Like Cuyler, Cole signed a low-risk deal with the Red Sox, and like Cuyler, he did not succeed.  Cole played just 24 games for the Red Sox with a line of .222/.296/.319 with five stolen bases.  Cole was just 30, but this was his last appearance in the Majors. 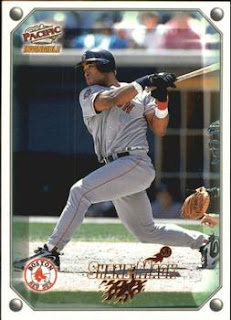 SHANE MACK - 1997
After two seasons in Japan, former Twins outfielder Shane Mack returned to the Major Leagues with the Red Sox on another low-risk signing.  The move was largely praised, and Mack, who once hit 18 home runs on the World Champion Twins, was predicted to have a big season.  He generally played pretty well, but he was not healthy enough and ended up only playing in 60 games for the Red Sox.  He hit an impressive .315/.368/.438 with three home runs and seven doubles in his short, injury-plagued stint with Boston.  He just did not quite work out as hoped, but it was a low risk.  After the season with Boston, Mack spent one more year in the Majors with Oakland and Kansas City. 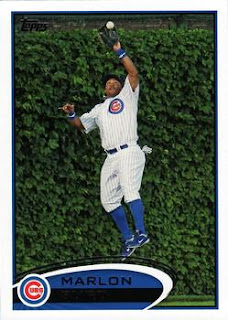 MARLON BYRD - 2012
Marlon Byrd has played 15 seasons with ten different Major League teams.  He came up with the Phillies and was a highly-touted prospect, finishing fourth in the Rookie of the Year vote in 2003.  He bounced from team to team, but managed to make an All Star team in 2010 while with the Cubs and had a 20 home run season in 2009 with the Rangers.  In 2012, Boston was having injury issues in the outfield and swung a deal with the Cubs to bring Byrd to Fenway.  Byrd did not really improve the outfield picture.  He played in 34 games with the Red Sox and hit just .270/.286/.320 with just one home run and seven RBIs.  Boston cut ties with him in June and he was suspended for failing a PED test.  He was able to resurrect his career the next season and continued his odyssey through the Major Leagues, until failing another test in 2016. 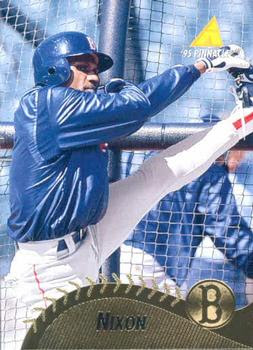 It was pretty slim pickings for center field.  Very few of the players here had good years.  And those that did, oftentimes did not play an entire season.  Ultimately, I decided on Nixon on the basis of the 42 stolen bases.  Despite his complete lack of power, he had a decent season with the bat, got on base at a decent clip, and of course, stole a lot of bases.  Only Tom Umphlett really came close, and he was generally better at the plate, but his numbers did not really catch the eye.  So Nixon's extreme speed gets him the nod.
Posted by Metallattorney at 8:00 AM

Email ThisBlogThis!Share to TwitterShare to FacebookShare to Pinterest
Labels: all time one year wonder, nixon