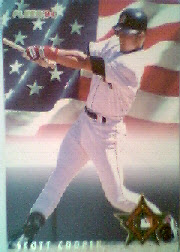 I have been a little hard on Scott Cooper on this blog in the past, calling him an undeserving All Star, among other things.  But the fact of the matter is that when I was young, I really did like Cooper.  Most of the reasoning for that is the fact that he was the team's lone All Star at a time when I thought that really meant something.  I knew Mo Vaughn deserved it more, but Cooper was the only one they sent two years in a row.

Of course Cooper was also indirectly responsible for the loss of not one, but two, great players.  In 1990, Boston traded third baseman Jeff Bagwell to the Astros because he was expendable since he was behind Wade Boggs and Cooper on the third base depth chart.  Then Boston figured they could afford to let Boggs walk as a free agent after the 1992 season because Cooper was developing into a decent major leaguer.

Cooper made his ML debut in 1990 but only made it into two games.  He had another brief shot in 1991 and hit .457/.486/.686 in 14 games.  He was nearly a full-time player in 1992 but bounced around the infield quite a bit.  He actually played more games at first base than third base due to the struggles of Vaughn in his first full season and the presence of Boggs in his last with the Red Sox.  He also chipped in at second and short briefly.

1993 saw him take over third base full-time and he hit .279/.355/.397 with nine home runs and 63 RBIs.  Cooper was also a very strong defensive player.  He was credited with a lot of errors but that had more to do with Vaughn's defensive issues than Cooper's.  Cooper had a very strong throwing arm at third that was actually his best asset.  He then hit .282/.333/.483 in 1994 with 13 home runs and 53 RBIs in the strike-shortened season.  His biggest moment was hitting for the cycle in a ridiculous 22-11 drubbing of the Royals.

After the 1994 season, Cooper was traded to the Cardinals with Cory Bailey for Mark Whiten and Rheal Cormier.  He would never come close to his numbers with the Red Sox.
Posted by Metallattorney at 10:30 PM