Underrated Player of the Year: 1995 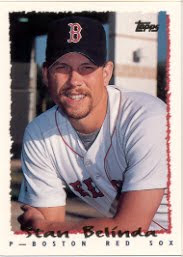 1995 - STAN BELINDA
The 1995 season saw a lot of changes for the Red Sox. They brought in new players at second base, catcher, right field, and designated hitter, as well as overhauling their rotation and bullpen, and letting young players take over at third base and center field. Stan Belinda was a part of the new look bullpen when he was signed as a free agent in April of 1995.

Prior to joining the Red Sox, Belinda was reasonably successful with the Pirates and the Royals as a reliever, but he arguably had his best year with the Red Sox. Belinda lead Red Sox pitchers with 63 games pitched in the shortened 1995 season. He struck out 57 in 69.2 innings versus 28 walks. Belinda finished the year at 8-1 with 10 saves and a 3.10 ERA solidifying the bullpen for the AL East champs. Together with Mike Maddux and Rheal Cormier, the Red Sox setup men in 1995 were the best group the team had in years.
Posted by Metallattorney at 6:57 PM

Email ThisBlogThis!Share to TwitterShare to FacebookShare to Pinterest
Labels: belinda, underrated player of the year